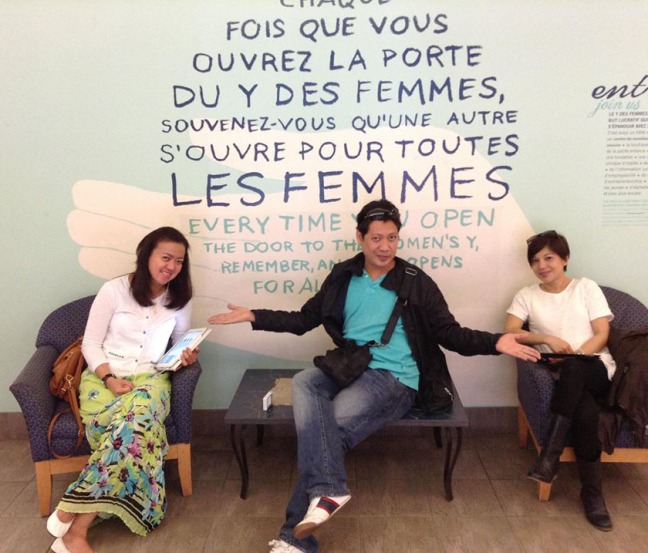 After a few hours of traveling by bus from Toronto, we arrived in Montreal at exactly 10:45 pm with rains on our heads.  My friend said what a way of welcoming us….shower of blessings, couldn’t agree more.

Although i’ve been to Canada several times since i always drop by in Canada everytime i visit the United States,  this is actually my first time in Montreal.

Flying all the way from Vancouver to Toronto, my friend Lovely convinced me that once i’m in Toronto, it would be a big mistake if i don’t visit  Montreal, and she was right……rain showers must have been a sign of what’s in store for us, endless shower of fun!

We arrived on the bus terminal and start walking to the hotel amidst the pouring rain and a slight confusion, thanks to Lovely and her wit we were able to take the right direction.

While Olive was saying “My luggage is all wet,” “mine too ” said Lovely ,i talked back and told them :  how in the world can you girls buy a waterproof mascara and yet you can’t buy a waterproof bag? ….it was just a joke ,i know nobody would wish to rain  when one travels and i know their bags are waterproof of some sort.

After checking in the hotel, we decided to eat on a local pizzeria a few steps away from the hotel. as i am really starving….who wouldn’t ?  two girls as traveling buddies who are always strictly on diet.

Well, that remains to be seen and somehow in the middle of our sojourn ,i know both of them will break their Moses Commandment and that is “Thou shall not eat when one is not really famish!”  lol….

It is  still raining in the morning.. but no rain , not even a storm will prevent me from roaming in montreal. I didn’t travel this far just to stay in the hotel.  Just like Mary Poppins (oh Olive and Lovely reallly have an ala Mary Poppins photo…wait and see..hehehe), we rode a train and off we go to what the locals call “The Old Montreal.”  I love the subway in montreal, every station has its own character.

The first thing we did was visit the cathedral, lots of  pictorials outside and in the cathedral …..stolen shots they say since one was not allowed to take pictures inside the church,as what the old lady was telling us. I obliged but  the two girls did not. We went inside several shops , bought souvenirs, had lunch, visited museums  and off we go for another train ride to watch a puppy pageant and another train ride to see stade and biodome.

We practically almost scout the whole area from downtown to  old montreal to every train stops.  We would start the day at 6 am and practically return to the hotel by  past midnight, non stop, we only pause for breakfast, lunch and dinner because as my two friends said  they are “tired and famished”  lol,.

.Lovely is so right,  good thing i drop by in Montreal. otherwise i wouldn’t  really witness the greatest show on earth : Cinde

rella and her wet shoes and The Runaway Girl.. a glimpse of the tempest and the lioness when they are struck not by lightning but by Famish.

How i wish i could tell.  Well, a trip is not an adventure unless you have little secrets. 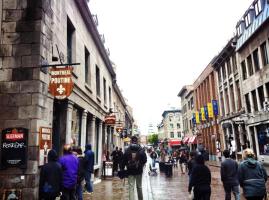 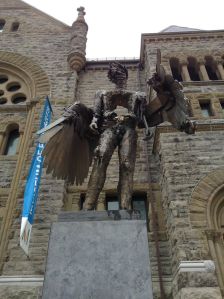 4 thoughts on “Raindrops on Our Hair”